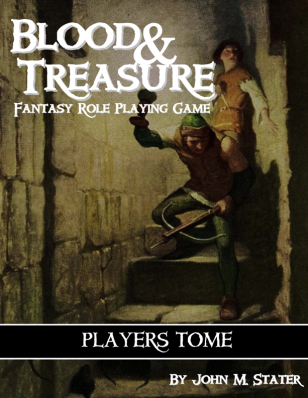 Form factor: Nice looking b/w books with good fantasy art. Very well written, clear and concise rules and simple but nice layout. The rules comes in 3 variants: A Players Book, a Treasure Keepers Book (GM book) and a Complete Book. The rules are quite simple and logical, but complexity is higher than say Swords & Wizardry or Labyrinth Lord (at least sans the AEC).

Community: Support for B&T is mainly by the author himself on his blog. There’s also a little-used forum, and a small G+ group.

Product support: Good. B&T is basically a one man show, but the author is one of those remarkably productive people, and a new book, the ”NOD Companion” is on the way for B&T. There’s also some excellent 3rd party PDFs with new races, classes and a psionics PDF.

Tinkerability: Very good. Also, not so needed, since the rules are very complete, and covers a range of situations.

Compatibility: Excellent. Some say that Labyrinth Lord is the Rosetta stone of OSR games. I think that Blood & Treasure fits that epithet better, since it covers not only the older versions of the game, but provides tools for using 3.X materials also.

Flavor: I would say that B&T feels like a mash-up of Pathfinder light and Swords & Wizardry. Very complete, but simple and easily adaptable to all types of games.

Hit Dice: Varying according to class (similar to B/X in values)

XP charts: variable, depending on class. Many classes share the same table though, so there are only 4 tables (including the multi-class table)

*All the classes also have a class variant included in the book. For example, the Assassin can be modified to a Bounty Hunter or Magic-Users can be Specialist Mages (2E style).

Blurb:
First of all, some of you might stop reading when you see that this game includes stuff from The Game That Shall Not Be Named, but please don’t give up yet.

Personally, I’ve got no problem with 3.X, more than the fact that I think it’s too messy to GM. Just like 2E when the splatbooks are added. Nevertheless, both 3.X and 2E splatbooks added some really cool things to the game. Things that you miss if you only go with the older versions of the game. Of course, you can modify and add house rules but that becomes messy too after a while.

B&T has the cool stuff from 3.X added in the base package, in a clean and simple way. Many times these rules are optional, and you can skip them without breaking the game. This is the main strength of B&T in my opinion. You can play it 0E style or as 3.X light. As much as I love the simpler rules of earlier incarnations of the game, that simplicity often goes hand in hand with fewer options: few races, few classes, small armor and weapons lists, small spell lists, small monster lists and so on. And this is cool in a minimalistic way, but I like options. B&T provides a simple core rules engine, with a few cool optional add-ons if you like. And LOTS of stuff: 600+ spells and 500+ monsters! In one (or two) book(s)!

Some highlights from the rules, where B&T differs from other OSR games:

These things might not be to everyone’s liking, but as I said earlier – cut away stuff you don’t like. Some might say that B&T isn’t an OSR game, but I think it’s just that. Or OSR+. Or whatever you want to call it.

If the races and classes in the book(s) aren’t enough for you, there’s a PDF of new races and a PDF with lots of new class variants (5 of each base class). Both can be found on the author’s blog. Also, the excellent OSR magazine NOD has a bunch of new classes, spells and monsters and the author regularly posts new material on the blog. There’s also a section describing the game and the mechanics here (see Origins and Nuts & Bolts).

Some downsides to B&T are the problematic multi-classing thing. B&T has an elegant way of dealing with multi-class level advancement. They use a separate level table regardless of class. The problem is that even if xp requirements are the highest, the multi-classes are going to get much mightier than plain ol’ single class characters. This has been discussed on the forums, and the author has written down a few official optional methods for handling multi-class character leveling that should take care of that. Another thing is that the only class that gets multiple attacks when leveling is the fighter. That leaves the other Fighter subclasses in the backwaters in comparison.

And if you look for that old school esoteric writing style or Lamentations style evocative writing – there’s none of that here. The book(s) are very well written in short end effective prose, but that also makes them a bit non-personal and generic. Naturally, this is a very subjective point, but it’s one that I’ve thought about.

Sadly, I don’t think that this game has attracted nearly enough attention on the OSR scene, and this might be due to the fact that there’s no free version of the game. The PDFs and books are reasonably priced, but people are reluctant to pay for gaming stuff when there’s so much free stuff going on. Sad, because I think a lot of you guys would love this game if you see past it’s 3.X connection.

All in all, this feels like AD&D done right. Or 3.X as it should have been done. For me, the simplicity of the rules, coupled with the completeness and multitude of stuff, makes B&T my main choice for my new OSR campaign with my main play group. The book has been on my nightstand since I got it and I find that I return to it ever so often to look up stuff.

And even if you don’t want to use the rules, the spells and monster sections alone are worth the price of admittance. Basically, all the monsters and spells from the d20 SRD are accounted for. In a much simpler format. Very easily converted to your favourite OSR game.

3 thoughts on “Flavors of the OSR: part 3 Blood & Treasure”