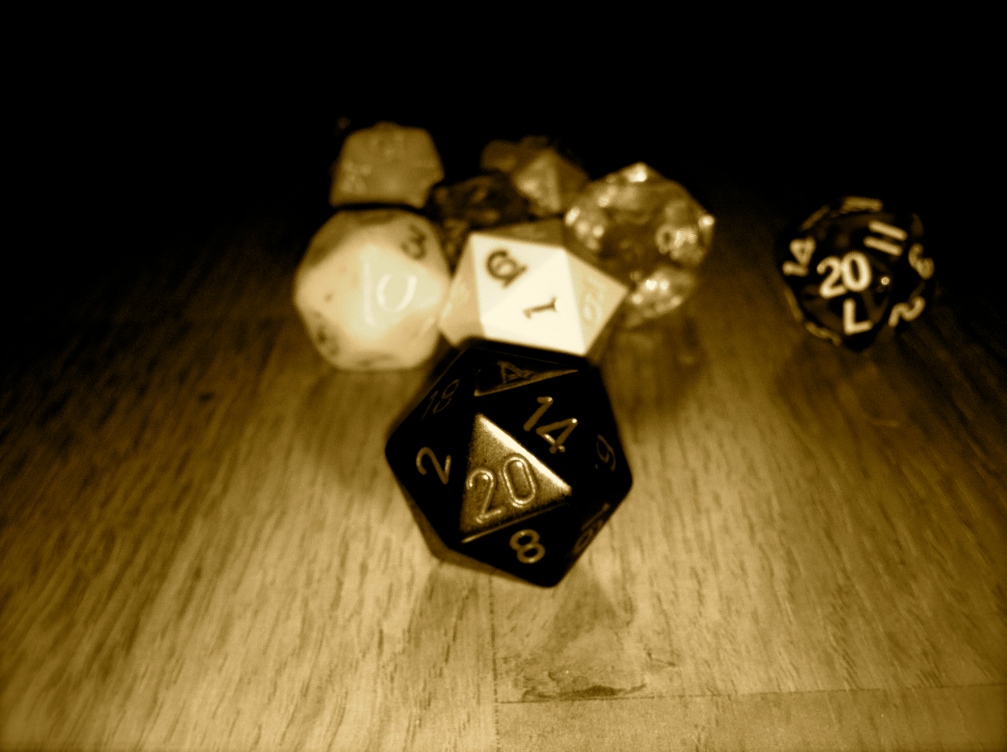 I was just sitting and thinking of the games I have played since returning to the hobby. I started lobbying with my old gaming buddies in 2010 and finally, early 2011 we got the wheels going. As we only play about one 8-hour session per month, longer adventures take up many sessions. Not a very effective lot, my crew…but fun!

But I want to play more often, and will probably recruit new players and try to play at least every 2 or 3 weeks. Maybe shorter sessions, like 4-6 hours.

The day before yesterday I tried a lot of new things:

We used the free PDF basic rules (available here), while the GM used a mix of the Basic rules and the full Player’s Handbook.

Initial reaction? It was really, really fun! The rules are simple enough to not get in the way and hog up the game, but at the same time they are detailed and flexible enough to accommodate the situations in the game. Both of us players as well as the GM were n00bs with 5th edition D&D, but there we learned as we played, which was nice.

I also liked the quick character generation (about 30-35 mins for my first character, including reading). Also, the backgrounds felt like a good addition to the game, as well as the equipment packages. As I loathe the meta-gamey “character building” and power gamer aspects that started in the end of 2E and culminated in 3E/PF, its nice to see that those things are mostly absent from the new edition. Of course, if you enjoy those bits, maybe 5th edition will feel like a step back.

Playing over the internet worked much better than I initially thought, and the other guys were very helpful with telling me how it all worked. We played a little home-brew thing as a prequel to “Lost mines of Phandelver” (I think), and despite not knowing each other we quickly got into it. Nice experience!

I must confess that I held some initial skepticism toward 5E, especially after following the play test for some time. And at first reading of the free PDF it felt kinda “meh” – not bad, but not good enough to make me leave my old favorites. However, this first test ride and actually making a character has swung me around a bit. In fact, I ordered the PHB the other day, as I got a discount check for an online bookstore. About 38 bucks including shipping is about as cheap as they will be over here I think, so I did it!

So, is it OSR then? Well, there’s a mix of old and newer concepts in the rules, so its not pure old school. But I think the rules are modular enough to let you play old school style, and that’s good enough for me. Some things I’m less fond of, like regaining all your hp after a long rest, but I think such things are easy to house rule. Also, the power levels seem higher than in OSR games. Not 3E high (can’t say about 4E as I never got into that), but higher. The monster stats I’ve seen are also more elaborate than the early editions, but good enough I think, and probably quite easy to convert. The only thing I didn’t like is the absence of a PDF or electronic version of the game. I love books, but sometimes the electronic version is quicker. For example, the online SRDs of Swords & Wizardry and Pathfinder has seen heavy use at our tables. And a searchable, inter-linked PDF is also very useful.

Given that my OSR favorites are those that – (i) takes the old school rules and evolve them a bit (Blood & Treasure, Lamentations of the Flame Princess and Fantastic Heroes & Witchery) or (ii) stay very simple and true to the old rules (Labyrinth Lord and Swords & Wizardry) – this version of D&D feels like a near perfect fit for me personally.

In contrast with many others, I don’t think that the new D&D will attract tons of new kids to the pen-and-paper RPG fold, restoring ye olde times of RPG glory, but for kids getting into the game or those who are curious about it, the high production values in combination with availability in ordinary bookstores will probably attract some extra people to the hobby.

To conclude, this far I must say that I’m very positively surprised by this edition, and I’ll probably end up with even more books on the shelf. And given that the number of people playing 5th edition D&D will probably surpass the B&T and FH&W crowd by huge amounts, the ability to join online 5E games or running some myself is indeed realistic.

I already long for the game next Thursday evening 🙂

Inside the Tower of Dust