We had a good session today, the 3rd in order playing the Ravenloft module “Night of the Walking Dead” with the OpenQuest/Renaissance rules. All players except one was present and in for gaming.

The session started with a recap that I wrote yesterday, mainly to remember what has happened this far. Last time, we left off just after one of the players had witnessed the bizarre funeral with the chained coffin. After that, he went to the Vodoun church to take a look and met a strange three-eyed raven…

I thought that this session would be mostly investigation in the village, but the characters went to (a) the blacksmith, to buy weapons and (b) to the general store, to buy adventuring gear and new clothes. Our Caliban “Dashing Rogue” took the role-playing prize by burning all his meagre funds on foppish clothes. From the blacksmith’s wife they learned that her son had been missing for five days, after never having returned from his work at the d’Tarascon plantation.

After walking through abandoned sugar cane fields they arrived at a silent mansion with dark blinds covering all windows. The locks were too powerful to pick, but they climbed to the second floor and smashed a window. I hadn’t planned for this, but had a cool mansion map prepped just in case (aenglum.blogspot.se, see oldest post in the portfolio). I saw a perfectly good horror scene here, so I went with the flow. The dark, eerie mansion with all the rooms and doors really made the players up their paranoia, and I threw in strange sounds just to keep them nervous. It worked 😉

Then on the second floor, they heard a gnawing sound behind a door. Two of the characters stormed in, to witness a woman in a maid’s outfit sitting over a very bloody week-old corpse, feeding on the dead flesh. Two missed sanity checks. Two massive sanity losses. Two temporarily insane characters.

With some crossbow and machete work they managed to defeat the evil ghoul maid, but they were really shaken. That’s when sounds of lots of shuffling feet started to emerge all over the place, and a panicky scramble to get out started! No more combat, but I must say that the scare factor was high!

The characters went back to the village to speak to the Constable, but managed to aggravate him to the point of nearly being thrown into jail on account of being “foreign troublemakers”. They also learned that the d’Tarascon family have a townhouse in the village. We left off outside the townhouse, when they after several missed lock-picking attempts started to work at the front door with a crowbar, and the Constable along with two deputies arrived in a really crappy mood.

I must say that my OpenQuest/Renaissance amalgamation works really well with the Ravenloft setting. One thing however, is that the standard D&D trope of attacking head on is ill advised with these rules. Bodily harm and insanity will follow, and much faster than with D&D.

Awesome game today. And I will prepare the townhouse as well as some weird red herring stuff in the village. This adventure can be expanded a lot without damaging the “core story”. I’ve decided to go with the flow here and spin on the players’ ideas. Great stuff for stories!

This is a good gaming week.

Yesterday, I played in Dave Valderhaug’s Forgotten Realms online 5e game: “The Mask That Bleeds“. Fun as always, and with an almost full crew. It’s so cool to play a good ole home brew, no matter what edition number is printed on the books!

And on Sunday, we will run Session 3 of my OpenQuest/Ravenloft game!

Last session was August 24, and after that a lot has happened in real life so I must confess that I have forgotten most of what went down in the adventure, this far. Probably Saturday will be spent re-capping things for myself.

We also lost a player due to life issues. He was to play his first session on Sunday, but backed out.

Anyway, I really look forward to some face-to-face gaming goodness!

Today was scheduled to be gaming day.

As it turned out, my gaming group got other things to do, so in the end we were two participants, and we canceled.

What makes me sad is that we’ve discussed this many times before. Apparently, gaming is not high on the priority list. Some of the guys doesn’t even answer communications.

Still, when we started, I explicitly asked everyone if they wanted to join this adventure and we also made a “group contract” that people would answer communications in good time and try to participate as much as possible. Come on, it’s 5-6 hours per month, or about 1.04% of our waking time (given 8 hours of sleep).

And we all have demanding jobs and families that need attention, so that’s not unique in any way.

Thing is, most of them really love playing and we usually have a great time at the table.

There’s a few really standup guys in this group, but now I feel we must look around for more stable players. Can’t depend on these guys. But I thought we sorted that out before…

Anyway, now there’s not going to be any more face-to-face playing until after my disputation in the end of October.

Luckily, I have an online game going on and another in preparation 🙂

This game has been in the pipeline for a long time, but last sunday we finally managed to gather half the gang and start the game!

First impression? Awesome! For both me and the players.

All from Darkon in The Land of Mists

*= a Caliban is someone (almost always human) touched by the Chaos or the Darkness in the womb, thus they are Marked by Chaos and generally shunned by most normal people.

I also used pre-prepared equipment kits, so we managed quite fast. Then I started, by handing them this: 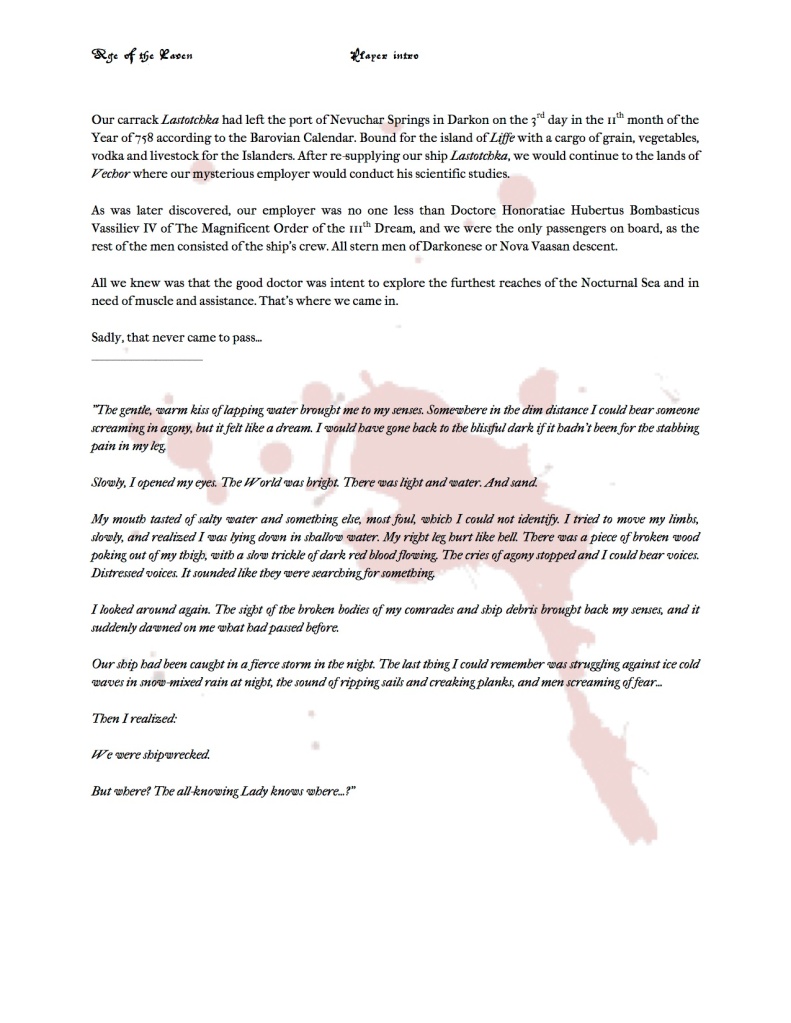 So we started the game with having them shipwrecked in a tropical land, when they had fought a wintery snowstorm the night before! And all their stuff was gone!

I had them roll a Luck check (POW x5), and if successful they could keep one item of choice. Then they got to roll 1d3+1 times each on my “d30 Shipwreck Table” to see what they would be able to salvage from the wreckage. We had some good laughs there, as they managed to get all the weird stuff like: Lizardfoot backscratcher, Wooden Martial Aid, Hook Hand, Dragon Tooth, Used Toothbrush and so on.

It was fun to see how they would manage the dangers of a tropical swamp without proper armour, weapons, food, water and so on. A large portion of the session was spent trying to find water, trying to make makeshift spears and bows out of stuff from the beach. Finally, they went into the swamp, where they had a run-in with a huge crocodile and in the end, met two Pumpkin-Head Scarecrows near a dead body and a run-down swamp boat. An intense battle followed, where we got to try the various combat maneuvers and even a fumble where the elf tried to spear a Scarecrow grappling the Bounty Hunter, with the result that the spear ran through the straw-man and into the face of the player character. He rolled good, and managed to dodge, but still got a nasty wound in the cheek. The elf also missed his Fear check** and panicked, jumping into the boat and abandoning his buddies for a while. The Combat Reference Sheet was very handy, I had one and the players had two to check for maneuvers and so on.

We left off, when they slowly left the swamp waterbank in the half-rotten swamp boat, after having defeated the Scarecrows and throwing their pumpkin heads into the swamp. Which was a very good move, since these vile beings re-constitute themselves if not completely destroyed.

**= We use the Sanity Rules from Renaissance, as well as the Critical Hit and Fumble tables. Awesome, and a bit easier on PC survival rate. I think…

Everyone had great fun, and I think OpenQuest is going to be played a lot in our little group! Hopefully, the rest of the gang will make it next time!

Also, if you’re interested, the Combat reference sheet and some more GM and Player Aids are available in the Alexandrian Library section of this blog.

Teaser for Age of the Raven

Selling the new game to the players…