Worm Tumor by Logan Knight at the Last Gasp blog

A while back, we played the excellent body horror adventure The Sleeping Place of the Feathered Swine by Logan Knight (see his blog Last Gasp here).

The adventure is free and can be gotten here

I inserted it into my Blood & Treasure Complete game set in the Lost Lands (by Frog God Games) and it was a blast! We’re currently running Stoneheart Valley, but I’m using it as an extended sandbox so we’ve had a lot of adventures not detailed in that book. It’s a pretty standard D&D fantasy world, albeit on the low fantasy side if compared to for example Forgotten Realms. A bit like Greyhawk with some Realms of Crawling Chaos thrown into the mix if you will. As the players were in the “standard fantasy D&D” mindset, this little gem of an adventure really threw them off their feet!

The adventure is written for Lamentations of the Flame Princes, so for those interested, here’s the B&T stats for the creepy monsters in the adventure module:

Special: Fortitude save to avoid being infected by worms on any contact with the Tumors or their bodily secretions.

Special: Fortitude save to avoid being infected by worms on any contact with the Tumors or their bodily secretions.

And the rest you’ll have to read in the adventure 😉

For those interested in reading about our exploits in the Lost Lands, there’s a series of session recaps here. Be forewarned of spoilers, though.

The last week has seen some heavy roleplaying (at least for me, that is).

Last Sunday, we ran our yearly MegaGame™, meaning a whole day of gaming including lunch and BBQ & beer in the evening. Sadly, not all could attend, but it was awesome nevertheless. We began at 10 am and played until 10 pm, then some BBQ. (And sleepover for me as I live in another community). The rest of the family was away, so we could really release our inner nerds 🙂

Here’s a session recap if you’re into such things.

Basically, we managed to finish The Wizard’s Amulet and a large chunk of the main scenario in The Crucible of Freya using the Blood & Treasure rules. 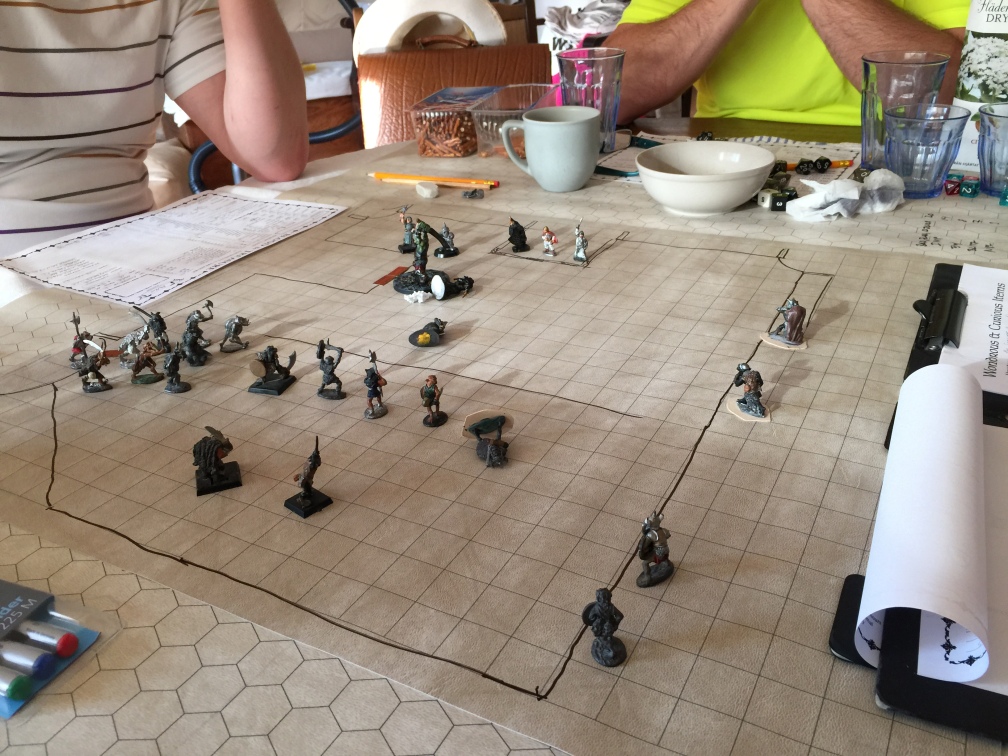 Taking on the orcs in the Keep (Crucible of Freya)

A few days later I got to play a session of Swords & Wizardry Complete with my kids.

It was session 2 of Tomb of the Iron God and they got to delve deeper into the tomb and met a lot of mean goblins that they managed to defeat by some smart “create chokepoint” tactics. Eventually, they got outsmarted and got a two-front battle as a detachment of goblins snuck up from behind, but they managed to block a door and could hold their position long enough to win the fight.

Next week I will run two sessions for my regular group – an extra session on Wednesday and our usual session on Sunday.

The Gatekeepers, Black Judges, Lesser Gods of Death and Transition

The Ostiarii (Gatekeepers) are a relateively new religion, thought to have spread to our lands with travellers and slaves from the South Lands. Their origin is possibly even older, making them contemporaneous with the Old Faith, that is now only revered by a few deranged druid hermits.

The three Gatekeepers are: Anûn, Thraš and Zishkapap. They reside in the Shadow Nexus, where souls go when they leave the realm of the living. The religious scholars of Bard’s Gate still dispute if the gods indeed are three, or if they are just different aspects of the same power.

The main doctrine of the faith is to ensure that those who pass on to the afterlife do so in the correct fashion and with dignity. Priests are officiating at burial ceremonies and other matters of death. The cult also opposes the most unnatural state of undeath, and the martial priests and templars of the faith relentlessly hunt down and neutralize all forms of undead. Another duty is to cater for those that are about to pass away, and see to that they are comfortable and reasonably content with their fate.

The cult of the Gatekeepers have very few temples, mostly relying on travelling priests to spread the word. There are two larger religious centers: The Monastery in the far north mountains and one in the Circular City (or any large city in your world). The Order of the Hammer functions as the armed branch of the cult, and are responsible for taking care of threats to the cult, such as evil death cults and outbreaks of undeath.

I made this new religion/cult for one of my players who’s playing a death domain neutral specialty cleric. The format is similar to the gods of the Lost Lands setting (from Frog God Games), but can of course be used for any d20-based game. I like that they do not include stats for their gods. Gods are omnipotent beings and shouldn’t be degraded to yet another (if high leveled) monster for the characters to battle.

This month I’ve stayed away from social media a lot. OK, some stalking and the occasional “+” or comment at Google Plus, but mostly away.

This hasn’t been a conscious choice, but work, social and family demands have taken up almost all my time. The little scraps of me-time, I’ve used for reading up on my upcoming game and creating stuff for the same.

On Sunday, we’re rolling up characters for a sandbox-y Blood & Treasure campaign in Frog God Games/Necromancer Games Lost Lands setting. I’m starting them out with The Wizard’s Amulet and The Crucible of Freya and from then on it’s up to the characters… Maybe Tomb of Abysthor. Maybe Lost City of Barakus. Maybe Sword of Air or even Rappan Athuk…

I’m also throwing in home-brew adventures and published modules in the setting and I hope this can become an epic sandbox campaign over the coming years.

Look out for play reports!

After our other GM so abruptly decided not to run 5e with us, I’ve been thinking of what type of game I would feel like running next. After having been in Dark Fantasy/Ravenloft/TotGaD/WFRP-land for a long time I think it’s time for some good ole high (well, high for me that is) fantasy again.

As I was on playing hiatus during the 3.x era the Necromancer Games modules feels fresh to me, and I really like what Frog God Games is doing, so my traditional fantasy is going to be taking place in the Lost Lands using S&W Complete with some minor hacks from B&T.

Really excited about this!