Just a quick update here. It seems everything has happened this week that I have been abroad on vacation (with very limited access to WiFi):

I’ve had a quick look at the B&T 2e book and it looks very good. A more in detail review is forthcoming. This is the first of two core books, basically a combination of player’s handbook and GM guide. The Monster book will be a separate volume.

Next up will be the B&T 2e versions of NOD Companion (renamed Esoterica Exhumed) and the Monster Tome (renamed Monsters II).

Book-wise the 2nd edition is a step up from the first. Prettier and better organized (however, I’m so used to B&T 2e now so it’s pretty confusing for me at this point). The PDF is also bookmarked and it has an index! Yay!

The rules are very similar to the first edition. However, the second edition feels like a step away from 3e-isms and nod slightly more towards old school aesthetics. Still, it’s the same game at heart.

The Zweihänder Grim and Perilous RPG KS is ongoing. For those interested, it is a game in the vein of Warhammer Fantasy Roleplay 2e, but evolved to allow gaming in any type of dark fantasy world. Read more here! Kickstarter here.

Fun thing is also that Tanner Yea, who has worked a great deal on Blood & Treasure (both editions) is also involved in Zweihänder RPG. Link to his blog.

As I’m currently planning to take a pause from D&D-ish games in order to play some Call of Cthulhu and  WFRP 2e, this fits me perfectly. I really hope that Zweihänder will become the Labyrinth Lord or Swords & Wizardry of WFRP – reviving this great and unique game that has so many cool things and that always seems to be out of print… 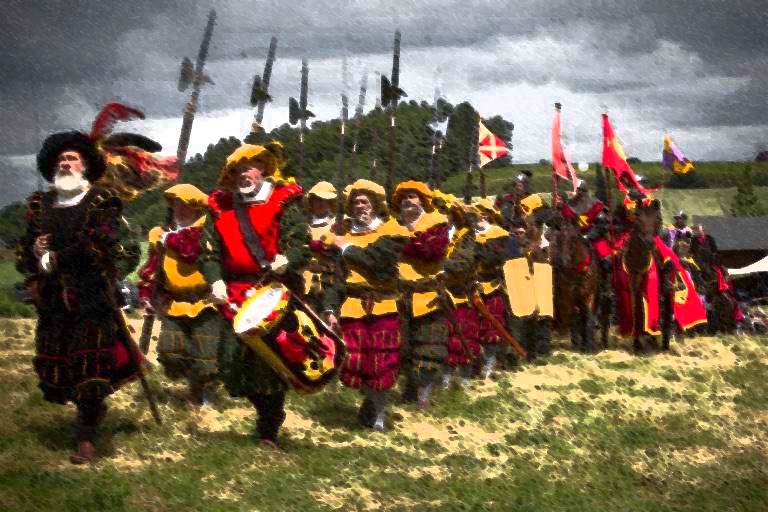 Warriors of the Old World on the march…

The last 5 years I have mainly GM:ed and played D&D style games – old school, new school and clones. I’ve felt an increasing urge to move over to other RPGs for a while, but for some reason we have always come back to D&D. At this point in time I feel a tad burned out on D&D-style gaming – it’s like eating pizza every day. And the same type of pizza as well.

Time for GM preparation and play is scarce these days and coming back to a simple and well known system is of course tempting. The other main reason is player demand. Or so I thought.

The last month I have reached out to the other players and discussed what to play next and it turns out that they long for some good old Call of Cthulhu, so I’ve decided to start up a Masks of Nyarlahotep campaign – an adventure that I have wanted to run since the 1990s!

And after the first chapter of Call of Cthulhu I aim to run another favourite of mine – Warhammer Fantasy Roleplay. I’m a bit worried about this since I haven’t ever GM:ed WFRP and I have very little play experience – basically a handful of sessions of WFRP 1e with a very weird (and lousy) GM back in the day. A few years ago I got hold of the WFRP 2e book and a bunch of supplements and immediately felt that it was right up my alley. I have since collected more of the 2e books from here and there, so now I have a serious source of materials to read up on!

Looking forward very much to the adventures of the coming fall!

I’m not dumping D&D forever, but at the moment I’ve had my fill of that particular style of gaming. I will continue to write on my ongoing D&D-style adventures though…:)

Lousy, because our at the table sessions have been quite few and also laden with real intra-group conflicts between some of the players. This has finally resulted in a player quitting the group altogether. Sad when such things happen, but maybe the remaining group will function better without the tension. We’ll see…

Good, because I finally tried online gaming, and hit precisely right in a new 5E game with some awesome people!

Anyway, the games we have played this year has been:

Pathfinder – The first half of 2014 was spent playing Parts I and II of the Falcon’s Hollow adventures with the main group (with me as a player).

Swords & Wizardry Complete – The original version of No Country For Weak Men, followed by Dyson Logos’ Ruins of the Gorgon (from Dysons Delves I) and  J. Raggi’s Tower of the Stargazer for my son and nephew (with me as GM).

OpenQuest 2/Renaissance – I also started an unholy mix of d100 mechanics and the Ravenloft setting. The campaign have been a slow starter, but finally we took off and now we’re in the middle of the Night of the Walking Dead module. Awesome! (I’m the GM in this game and if you are interested you can read more about it here and here’s some actual game recaps).

D&D 5th edition – Finally, I answered an ad for players on Google Plus, and ended up playing some really awesome home brew adventures with a group of cool people from all over the world. We play once a week and started out with two players, then three and now we are five. All are 5e noobs, and it has been a very good way to try and to learn the new rules in a stepwise fashion. When we started we used the free basic PDFs, but now we’re using the full rules.

So, what about next year?

Since my PhD now is conquered and my new work assignments more in place, I imagine that there will be more time for gaming in the coming year. This is my 2015 RPG playing wishlist:

Warhammer Fantasy Role-Play – I’ve collected most of the books for WFRP 2e, and I really want to run it for my group. It’s a little daunting, as my experience with the game is limited to a few sessions as a player in a WFRP 1e game a long time ago. One of the players have played 1e some more, but it’s basically new ground for us. I’ve been thinking of running the Enemy Within, but I think I will go for some shorter adventures first.

Blood & Treasure – The game that gets the most tick marks on my OSR game feature wish list, as it manages to include most of the cool stuff from all old editions of the game (maybe OSR+?). In other words, it’s the OSR game that I need to house rule the least. I plan to move over the above S&W Complete game to B&T to try it out, and if it works out fine, I’ll use it for my upcoming dark fantasy Nexus Mundi game (which is my hack of Tales of the Grotesque and Dungeonesque) as well as one-shots and old TSR modules.

Fantastic Heroes & Witchery – My other favourite OSR+ game, that I want to use for the really dark Nexus Mundi adventures. I think that FH&W is a very good fit for dark fantasy games, and I’m very curious of how it will run.

Lamentations of the Flame Princess – I just love the quality of the books. And the adventures. Yes, the engine is very b/x-like. But the feel and scope is very different. Almost like an OSR version of Kult in the 1500’s. I’d like to run it for my Wife-group – that’s me and the other GM in our group and our respective wives. I ran some very nice Call of Cthulhu sessions last year, and I think that the theme of the LotFP adventures in combination with the lighter rules will be a good fit. We usually meet, have something nice to eat and play and drink wine. Easygoing and not too serious. And my wife is huge horror fan, so that stuff will definitely hit home.

D&D 5th edition – I was quite sceptical to Next/5e in the beginning, but have decided to try to GM a game further up the road. The Pathfinder GM has also bought the books and we have been discussing to co-DM a traditional D&D game in the Forgotten Realms. Might be fun! He has also bought the new dragon modules, so I expect to be a player in those in the foreseeable future. I have read the Player’s Handbook and the Monster Manual and I know that the Dungeon Master’s Guide is under the Christmas Tree this year…:)

More games on the wishlist that I will put on hold for a while:

OpenQuest 2 – The very cool adventures from d101 games. Or my home-brew adventures based in Sanctuary (the old Thieves’ World box).

So many games. So little time.

A Writer's Corner on the Web