Last week, I ran session 2 of A0 – Rising Knight with my 11-year old daughter.

We began with her descending the stairs down into the dungeons below the temple ruins. Using stealth and smart tactics, she managed to outsmart and slay the guards in the first room and then continued to explore the underground temple.

She had several encounters with more goblins and in the old ogre quarters, she found the hidden treasure (where I had added a few small vials of healing). Delving deeper into the structure, she came upon the second guard room and the battle that ensued was fierce. She managed to slay all four goblins, but was wounded down to 1 hp! Luckily, she had that potion of healing, because then I rolled for a random encounter and four more goblins descended on her! She managed to defeat two of them and then resorted to retreating further into the temple, and that’s where we had to stop for the day.

She’s now considering to flee back to Malforten to recruit more adventurers, or maybe try to lure out the goblins to enable her to delve further into the dungeon.

Funny thing was, that in the beginning, she felt bad about slaying the goblins, and tried to beat them unconscious and tie them up instead, but after they tried to kill her, she immediately changed her tactics to more “standard dungeon operating procedure” instead.

I’ve also decided to use the Fate point mechanic from the CKG in this game, to give her a fair chance of completing the adventure alive.

All in all, a fun session 2 and we’ll continue in a few weeks when she’s back from her mother’s place!

Type: Hybrid (Basically a toned down version of 3e, with old school aesthetics)

Availability: Free simplified Quick Start version. Paid full color PDFs and print versions at Troll Lord Games. PDFs are also available from DTRPG and furthermore the books are sold through retail channels both online and in physical stores. Moreover, TLG have distribution in Europe, so I can order C&C books from stores in Sweden, UK and Germany. A huge plus for us Europeans these days when shipping costs from the US often cost more than the actual book. 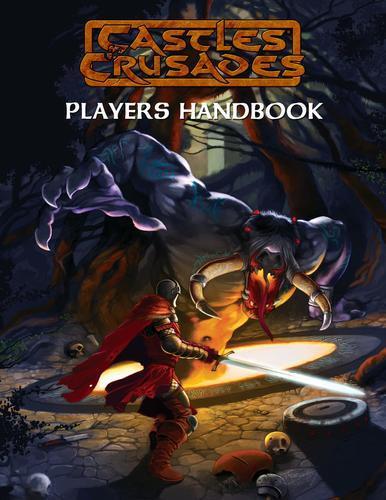 Community: The game has a dedicated forum and a fan-site called the Castles & Crusades Society. There’s also a dedicated G+ group.

Product support: Very good. Since C&C is developed and published by a “real” publisher, there are new books and adventure modules coming out all the time. There’s also some product support by Paizo and Goodman Games. On the fan side – not so much, at least if compared to more open OSR efforts. But I must mention the Crusaders Companion – a free fan-made PDF with lots of new classes, spells, monsters, races, sanity rules etc etc.

Tinkerability: Very good. Also, not so needed, since the rules are very complete, and cover a range of situations.The Castle Keeper’s Guide (i.e. DMG style book) is chock full of optional rules and variants.

Compatibility: Excellent. I’d say that C&C really can take up the epithet of being a Rosetta stone of d20 games. It’s closeness to 3e as well as 1e makes materials from both those editions easily usable with C&C without fiddly conversion.

Hit Dice: Varying according to class

XP charts: variable, depending on class.

Blurb:
After returning to RPGs using Rules Cyclopedia, I went shopping for a game that would meet the demands that me and my players have these days and that we felt RC didn’t cater for. One of the first games I checked out back then was actually Castles & Crusades. The books were not available here so I tried to order from Troll Lord Games directly, but sadly they didn’t support overseas orders and PayPal then, so I scrapped the idea and stumbled into the OSR-clone mire instead… However, I’ve always had an eye on what happens in the C&C world.

About a month a ago a guy over at G+ sold a bunch of the new C&C books at a really good price and I bought 9 books from him. And since they arrived they’ve been on my bedstand for my evening read. And I must say I’m most impressed. I can also see where Blood & Treasure, Fantastic Heroes & Witchery and even 5th ed. D&D must have found  inspiration for some of their mechanics.

Some of you may argue that C&C isn’t an OSR game and in some respects it is not, I agree. But you may also argue that it is in fact the first D&D clone/variant. From what I’ve read, the first iteration of C&C was published under the OGL in 2004.Back then it was a box with 3 booklets and over time it has evolved to a 3-book core set. Cool thing is that that 1st box is fully compatible with today’s rule set. It’s still the same edition, but the printings differ a bit in style. And of course in errata and minor rules adjustments. I find this extremely sympathetic, as some games I like have suffered from severe edition-itis lately (I’m looking at you, RuneQuest…).

So what’s so likeable about C&C, then?

Professional product – The game is produced by a game company meaning good support and availability in shops or online. I really miss going to the game shop and buy physical products. The book quality is super and there’s a lot of extra stuff like a GM screen, printed world maps and so on available. Nice.

Good game design – The books are well written with good design choices. They have been extensively play tested and have been around since 2004 in about the same shape. The rules also cover a wide range of play styles, equally supporting dungeoneering and investigative games. Nice.

Old school aesthetics – Reading C&C feels like reading any old D&D or OSR game. The feel is there. The difference is that most of the mechanics are from newer editions of the game, but without the power bloat and meta-gamer feel that I always feel when I read for example Pathfinder. Nice.

Completeness – C&C feels like a very complete game. There’s no need to add a lot of house rules as most of the ones I ususally add to OSR games are already there. And the CKG is a very, very good GM book for about any GM of d20/D&D style games. Lots of optional rules, variants and ideas there (much like the 5e DMG). The game is also very modular, making it easy for Castle Keepers (GMs) to adapt the game to their particular play style. And it also has some extra cool options for the players to get excited over, without making the game a player bloat fest like 3.x might become.

The Siege Engine – This is C&C’s core task resolution system, and it’s basically an evolved attribute check system. No skill lists to keep track of. Basically, a character have Primary and Secondary attributes, determined by class and free choice. If you use a task related to a Primary attribute it’s easier to succeed, while if using a Secondary attribute you won’t succed as often. The GM will also assign a difficulty class to each task. Then you roll a d20, add the relevant ability modifier and your level and try to beat the target number. Easy. And not very far from what 5e is using.

For example: Runar has Dexterity as a Prime attribute. This means that the Challenge Base (CB) number is 12. Runar is walking a slippery ledge and the CK wants him to make a Dex check to see if the slips. The CK has assigned the check a Challenge Level (CL, think DC modifier) of 4, meaning that the target number (or Challenge Class) for Runar is 16. Runar rolls a d20 and adds his level and Dex bonus to the roll. If Dex had been a Secondary attribute, the Challenge Base would have been 18 instead, making the target number 22 instead of 16. There’s some more details to this, but basically this is the core mechanic for resolution of all tasks in C&C.

In conclusion, I feel that a game like Castles & Crusades really should have a sh*tload of fans. Sadly, it feels like a rather limited crowd of them at this point at least.

Free offerings and many cool OGL/OSR games probably have scooped up a lot of potential C&C fans, and some may be in the 5e camp. For those firmly in the old edition D&D camp, C&C might be too “modern” in it’s design choices, but I can’t see how you couldn’t play pure old school with C&C with just a few small tweaks.

Another contributing problem might be that Troll Lord Games seem to want to keep the game “in house”. There’s no free or open license like for Swords & Wizardry or Labyrinth Lord, meaning that you cannot write cool C&C compatible adventures and self-publish them on DTRPG or Lulu. As far as I know, you may write and publish free stuff for the Castles & Crusades Society closed member group, meaning that only members there get access to your carefully crafted materials. Also, you can’t collect a few bucks to cover your costs for the amateur production. For me, this means that I choose other systems to publish for even if I’d like to support C&C. I don’t think I’m alone in this reasoning, and I personally think that C&C and Troll Lord Games would benefit greatly if cool fan made adventures were available on OBS and Lulu, as this would only serve to draw more people to buy the core game and other TLG products.

Anyway, to conclude for real, in my opinion, C&C is a serious alternative to both 5e D&D as well as the old school games, as it can handle both older and newer play styles in one simple rules system.

After we take a break in our current Blood & Treasure game, this is where we’re heading next. I was going to try GM 5e, but C&C pushes more of the right buttons for me so C&C it is! In the Haunted Highlands!